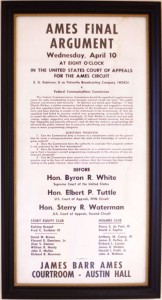 James R. Nichols and Harold I. Pratt, the founders of the Firm, met at Harvard Law School in the fall of 1960 as first-year members of the Holmes Club, an Ames Competition moot court club. Their Holmes Club won the Ames Competition in the Spring of 1963, shortly before Jim and Harry graduated from law school.

Following graduation, Jim clerked for a year for Associate Justice John J. Spalding of the Massachusetts Supreme Judicial Court. He then was an associate corporate lawyer at Herrick & Smith before joining the Trust Department at Goodwin, Procter & Hoar in 1969. Meanwhile, after law school Harry spent more than four years at Goodwin, Procter & Hoar leaving in January 1968 to pursue the development of Waterford Springs, a vacation community in northeastern Vermont.

The paths of the two founders crossed again at the end of 1975. Jim’s father had just retired from Goodwin, Procter & Hoar, and Harry’s father had unexpectedly died. Jim and Harry quickly began to assume significant fiduciary responsibilities. In March 1977, they formed the Firm of Nichols & Pratt to carry out those responsibilities, subletting space within Goodwin, Procter & Hoar with a total of four employees.

One of those employees was Leonard Patenaude, who became the third partner of the Firm in 1991. Over the next decade, the Firm added staff and moved to its present quarters at 50 Congress Street in the fall of 1988, increasing its footprint within the building as additional partners and staff have joined the Firm.

In 1992, Thomas E. Bator, previously with Palmer & Dodge, joined the Firm, to be followed by Richard K. Nichols, Jim’s son.

In 1998, Preston H. Saunders joined the Firm following his retirement as head of the Trust and Estates Department at Goodwin Procter.

Patricia D. Popov, a senior trust and estates attorney at Goodwin Procter, joined the Firm in 2000.

At the end of 2014, Sandy Saunders retired as a Partner of the Firm

In December of 2019, Craig Melillo joined the Firm from Eaton Vance as Lead Analyst.

At the end of 2019, Leonard Patenaude retired as a Partner of the Firm.

At the end of 2021, both founding Partners, Jim Nichols and Harry Pratt, retired from the Firm.

In January of 2022, Craig Melillo, the firm’s Lead Analyst was made a Partner of the Firm.